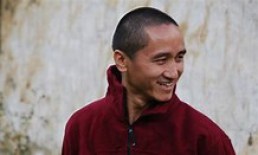 Geshe Tenzin Zopa (born 1975) is a Nepalese Tibetan Buddhist monk of the Mahayana tradition. He is the resident teacher of the Losang Dragpa Centre of the Foundation for the Preservation of the Mahayana Tradition (FPMT). Zopa is featured in the 2008 documentary film Unmistaken Child , which follows his search for the reincarnation of his beloved master, Geshe Lama Konchog. 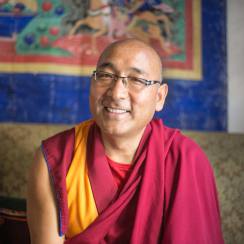 Geshe Sherab was born in Nepal of Tibetan parents, and received his education at Kopan Monastery, Nepal, the spiritual centre of the Foundation for the Preservation of the Mahayana Tradition (FPMT). He completed his studies at Sera Je Monastic University and at Gyume Tantric College in India. He has lived in the USA working at the FPMT Central office and several nearby Dharma Centres in Taos, New Mexico. He returned to Nepal after several years in the U.S.A. to become Headmaster of Kopan Monastery.  Geshe-la has retired from the Headmaster role in order to have more time to devote to meditation and to teaching internationally.  For the last few years, he has been travelling and teaching at FPMT Centres in USA, Canada, Mexico, Asia and Europe. 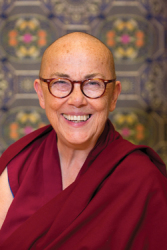 Ven. Robina Courtin is a Buddhist Tibetan nun and teacher, being part of the Gelugpa lineage,studying from Lama Thubten Yeshe and Lama Zopa Rinpoche.Robina was born in Australia. At the age of 23, already a hippy in the 60’s, she arrived to London and became involved politically as an extreme feminist, looking for the truth and ignoring happiness. After several stormy years, at the age of 31, she met Buddhism and her teachers – LamaYeshe and Lam Zopa. She went on to Tushita, India, where she became a Buddhist nun, studying, practicing and confronting her mind. Since then she has been going around the world, spreading the teachings of the Buddha, in an articulated way, matching the Western mind which she got to know so closely. 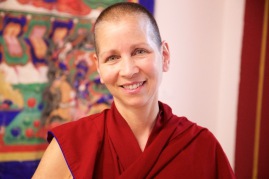 Amy J. Miller (Ven. Lobsang Chodren) first encountered Tibetan Buddhism in the spring of 1987 during a course at Kopan Monastery in Nepal. Since then, she has spent a great deal of time engaged in meditation retreats, study, teaching, and Buddhist center management throughout the world. Prior to meeting the Dharma, Amy was a political fundraiser in Washington, DC and also worked for Mother Jones Magazine in San Francisco, California.

From 1992-1995, Amy managed Tse Chen Ling Center in San Francisco, California. She then served as Director of Vajrapani Institute, also in California, from 1995-2004. From 1998-2002, she was also the Manager of the Lawudo Retreat Fund (which supports the center in which the sacred cave of Kyabje Zopa Rinpoche is located) in the Mt. Everest region of Nepal. In 2004, after resigning as Director, Amy completed a seven-month solitary retreat at Vajrapani. For most of 2005 and 2006, she organized international teaching tours for and traveled with the esteemed Tibetan Buddhist master, Ven. Kirti Tsenshab Rinpoche until Rinpoche’s death in 2006. Amy then became a touring teacher for the FPMT (the Foundation for the Preservation of the Mahayana Tradition). From 2008-2014, Amy was Director of Milarepa Center in Barnet, Vermont.

Amy has also had the good fortune to visit Tibet in 1987 and again in 2001 as a pilgrimage leader for the Institute of Noetic Science in the United States. She has also led pilgrimages to India, Nepal, Bhutan, Darjeeling, and Sikkim for the Liberation Prison Project and Milarepa Center.

Amy was ordained as a Buddhist nun in June 2000 by the great Tibetan master, Ven. Choden Rinpoche, and has been teaching extensively since 1992. Her teaching style emphasizes a practical approach to integrating Buddhist philosophy into everyday life. She is happy to help people connect with meditation and mindfulness in an effort to gain a refreshing perspective on normally stressful living. Amy’s courses and retreats focus on establishing and maintaining a meditation and mindfulness practice, death and dying, overcoming anxiety and depression, battling addiction, dealing with self-esteem issues, and cultivating compassion and loving kindness. She is also often involved in leading a variety of retreats.

Amy is the co-author of Buddhism in a Nutshell. WWW.AmyMiller.com